Cultural Event; a 11 day Beer-, Food- and Music Festival to celebrate the tradition of Oktoberfest, original held in Munich since 1810.

Dealing with a Muslim-American attorney in New York City struggling to define his identity, it is one of the most explosive and controversial plays in the last decade!

Event date:
Friday, October 9, 2015 – 6:30pm
Event address:
Books & Books
265 Aragon Ave
Coral Gables, FL 33134-5008
WHAT: The book COLLEGE AVENUE- A guide to enter into the best colleges in the US and get scholarships written by Carlos Alamilla

WHO:Carlos Alamilla, is the Director of Miami All Stars, a non-profit organization that provides services to underprivileged youth in education, basketball, fitness, and nutrition and has been working counseling youth for over 30 years. He graduated from USC-University of Southern California where he received his degree in Social Psychology and Marketing.

Internationally acclaimed director Jafar Panahi (The White Balloon) drives a yellow cab through the vibrant streets of Tehran, picking up a diverse (and yet representative) group of passengers in a single day. Each man, woman, and child candidly expresses his or her own view of the world while being candidly interviewed by the curious and gracious driver/director. His camera, placed on the dashboard of his mobile film studio, captures a spirited slice of Iranian society while also brilliantly redefining the borders of comedy, drama and cinema. “Can a filmmaker under house arrest make any more defiant a gesture than by directing a bonafide road movie?” asks Scott Foundas in Variety. “Such is the question implicitly posed by Taxi, the third surreptitious film à clef directed by Panahi since his 2010 conviction on charges of conspiring to create anti-Islamic propaganda. The result is a film of quiet but proud outrage, laughing on the surface, but howling in anger just beneath.” Taxi won the Golden Bear for Best Film at the 2015 Berlin Film Festival. 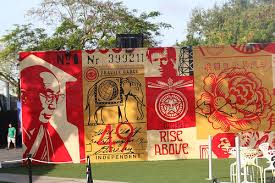 Occurring every Second Saturday of every month between the hours of 6 to 10 p.m.and extending throughout the night, this monthly happening features openings at Art Galleries, Art Institutions, and Retail Businesses. Thousands of people crowd the streets to have a great night out and enjoy the Miami Art Scene. Join this festive and lively evening happening each month!

Orchestra Miami kicks off its 2015-16 Season with an intimate concert at the Coral Gables Museum. In this relaxed evening of music and friendship, soloists from Orchestra Miami will perform chamber music from the composers whose music you will hear performed by the full orchestra throughout the 2015-16 season. the evening begins at 7:00 PM with a cocktail reception, followed by the concert at 8:00 PM.

Event date:
Saturday, October 10, 2015 – 8:00pm
Event address:
Books & Books
265 Aragon Ave
Coral Gables, FL
In 1892, Commander Peter Wake has left the world of espionage behind and is back in the sea-going navy. But duty has called him from his new Spanish lover back to Key West to investigate an assassination and prevent another one all of which leads him to old German foes in Mexico as well as Spanish ones in Cuba and Tampa. The life of the great patriot of Cuba, Jose Marti, is at stake.